The technical progression and technological revolution are facing a drastic hike in terms of languages, frameworks, programs, and tools every year.

Every language is trying to succeed in its own space but only some of them survive with serviceable features, and others naturally get out of the flow. Among the survived list, it is always revealed that an unnoticeable battle is progressing between PHP over ASP.NET. Even with the competent features of both the programming languages, why more people prefer PHP over ASP.NET?

Both these technologies are taking a lion’s share in the whole web development market, and hence, the selection process needs to be confirmed with your requirements.

Through this article, we are comparing these two languages with a hope that you can get into the accurate insight of how PHP is leading over ASP.NET.

Cost is a crucial factor for enterprises and business firms to conclude their web development decision. PHP shows a visible difference in the cost metric in comparison with ASP.NET. PHP being an open source and free platform, it gets compatible with Windows, Mac, and Linux. Along with that, PostgreSQL server, MySQL server, Apache server, and Linux OS are also free of cost. You need not pay a single dollar whenever you make an update. On the other hand, ASP.NET is a Microsoft product, and so a specific cost is associated with it. There is a misconception that we need to pay only a one-time fee to buy this product. But there are relative costs associated with this platform for every update. The weightage for PHP over ASP.NET considerably increases with this factor.

ASP.NET is intended to code programs that work in Windows systems. For the MAC and Linux users, they should use the Mono Project to use this language. Also, you should pay the licensing fee for Microsoft Windows Server,Microsoft SQL and also for updates.

Integrated Development Environment(IDE): ASP.NET implementation is carried out using the IDE called VisualStudio. It also refers as VS Express. For the beginners, the free version of this IDE suits well, but for the professionals, it won’t be enough.

In the case of PHP, it supports different IDEs were you can find free and paid versions.

The performance and speed of a platform are interconnected to each other. It ultimately depends on the time taken by the browser to respond. Also, the speed of communication between the servers are of prime importance

In the case of PHP, it works with various platforms and even with LinuxOS. It also uses the LAMP stack; i.e., MySQL, Apache, Linux. As the codes of the PHP runs on its own memory space, it brings out a better performance.

But in ASP.NET, the program is built on the COM-based system that slows down the program execution.

While thinking about the scalability factor, both these languages win. It depends on the talent of the developer to make the platform more scalable.  It can be easily accomplished by programming expertise, deployment of best practices, using a formidable framework, and following industry rules and regulations.  These factors are platform independent, and the practical approach makes the difference.

While considering the flexibility, ASP.Net wins an extra point with the object-oriented features. The oops concept facilitates numerous ASP.NET developers to work in the same project using languages like Visual Basic ASP.Net or C#.

Developers always need broad assistance from the developers’ community with accurate facts at the earliest time period. With a large number of forum posts, a PHP developer will get continuous help for no doubt. Compared to the community size of PHP developers, the ASP.NET developer’s society is not that broad.

Also, the PHP developers have the  open source LAMP module that delivers updates and insights from the worldwide developers. This wide range of support makes the journey of a PHP developer easier.

Also,it must be noted that the World’s largest social media giant Facebook  is using PHP as its back-end.

It is one of the most critical parameters to decide which coding language is better than other. If the language is tough to study and implement, then there is no scope for further research.

PHP is comparatively a simple coding language for a beginner. If you have deep insights on C, then your learning process will be more comfortable in PHP. The documentation and syntax are simple, even for a newbie.  Presence of functional modules such as PDF converter, File type converter, Graph, etc., make the studying curve more consistent.

On the other hand, ASP.NET uses C# language that demands more expertise.

The freedom of coding is the most critical factor that impresses a developer. In that criteria, PHP wins with a high coding freedom. Being an open source framework, PHP provides the freedom of coding to the developers. They can work on the structure that they wish.  The text editors such as Notebook++, jEdit, notepad, Bluefish or even Emacs can get used for these editing. This language derives from PERL scripting language. But in the case of ASP.NET, its core supports Linux, Mac and Windows.

While considering the in-built features, PHP is far better than ASP.NET. It helps the developers to a great extent. The simple and effective coding process is one of the major reasons why beginners prefer PHP over ASP.NET.

If a programming language can offer the best debugging tools, then choose it. Wasting  a lot of time for debugging will consume your valuable time that can be applied to other important tasks . In PHP, we have XDebug that provides breakpoints, stacks, path mapping, etc. Also, it completely substitutes the replaces echo(), print_r() or var_dump().

For a powerful programming language, it should possess well-designed web development frameworks that can be easily handled to create the applications. In PHP, we have unlimited frameworks, and the important ones are Codeigniter, Zend, Laravel, Symfony, etc, where Codeigniter and Laravel are commonly used. These frameworks can easily support e-commerce development, web and customized apps.

One of the main limitations for ASP.NET is, it can only support .NET framework and CLR (Common Language Runtime).

For a widely used programming language, the number of developers depending on the platform will be high, and at the same time, the number of libraries will be high. It helps to make the coding process more manageable. In PHP, we have the powerful Packagist (PHP packages repository) and held as the supporting factor.

We have already gone through the ‘Supporting Factor’ for these coding languages. Just like that, if there are lots of documents available for a language, it will be an added advantage for the developers to understand more aspects.

Vast documentation is available for PHP, in the form of tutorials, forums and webinars and you don’t need to take an extra effort for studies.

This diagram shows the position of PHP over ASP.NET in terms of prevalence and traffic (according to W3tecs.com). 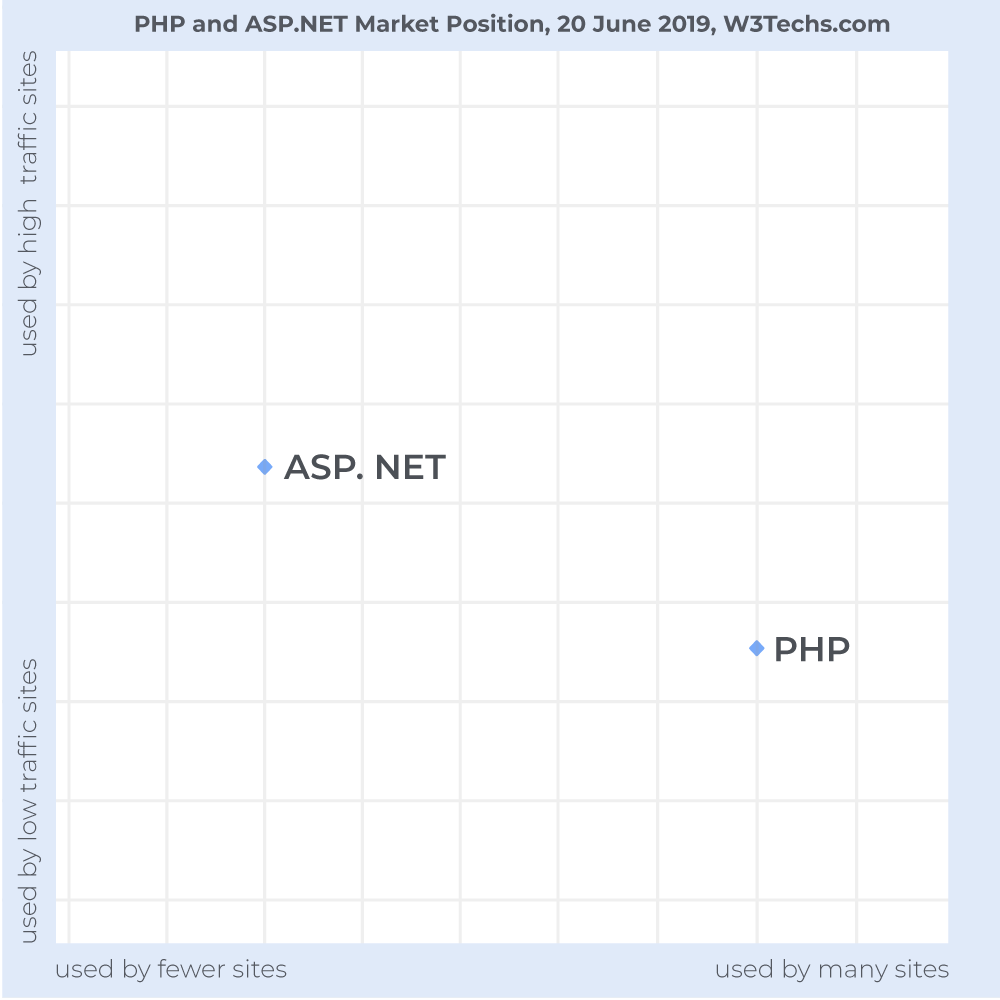 In terms of compatibility, PHP scores again, since it can work with platforms like Unix, Solaris, Windows, and Linux. Also, it can work with various web servers and database systems. PHP works on the principle “Write once to use anywhere”, and it improves the flexibility factor.

But ASP.NET works with LINUX and other Windows-based applications.

PHP language works on Unix and Linux server, and it makes the hosting procedure easier. But asp.net works on ASP apache and creates a hindrance for smooth hosting.

PHP framework itself works as an independent editor, and it can access the editors like VIM, notepad++, VI, EMACS, Bluefish, and JEDIT. But in the case of ASP.NET, the tools rely on  Microsoft Visual Studio editor and .NET applications. This dependency creates a freedom struggle for the developers.

We have already covered that, PHP has built-in database and components. This exclusive feature provides excellent security measures for the platform. An added advantage is that the  CMS platforms like WordPress also relies on the PHP platform.

The security of each platform depends on the way how the developers are using it.

While talking about the popularity of these programming languages, a glimpse to the statistics of w3techs (2019) will be worth. Over 79% of websites are using PHP over ASP.NET as the server-side programming language, and only 11.2% uses ASP.NET. The below-mentioned diagram shows a clear cut difference between these languages in terms of popularity. 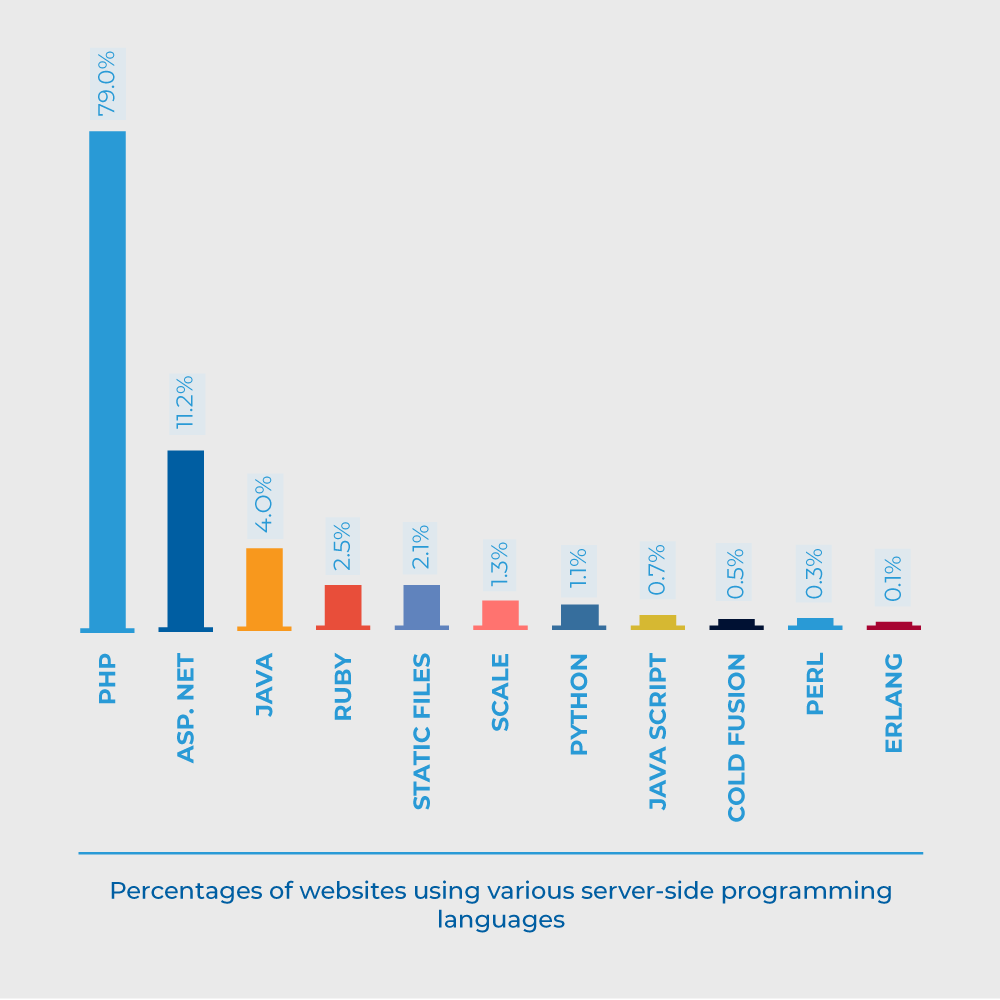 When we relate these criteria to the job opportunities, you can easily figure out that PHP offers more exposure. It has been installed by more than 250 million websites and supports many hosting services. According to the GitHub report of 2019, 559K is the number of PHP users, and it stands 4th position in terms of the user.

Pros and Cons of PHP

Dynamic websites: Dynamic websites includes web pages that can be controlled by the application present in the server. The source code in the website determines how the site should present to the user’s browser.

Web Content Management Systems(CMS): PHP can support various databases such as MySQL, Oracle, and MS Access and can cooperate with other services using IMAP, LDAP, POP3, NNTP, SNMP, HTTP, and COM. These features make the PHP suitable to create CMS for various popular websites. Some of them include WordPress and its plugins, the user-facing portion of Facebook, Joomla, Drupal, Moodle, Silverstripe, MediaWiki, Digg, etc. This is one of the main reasons why developers prefer PHP over ASP.NET.

GUI Based Application: PHP has tools like PHP-GTK 2, DevelStudio and ZZEE PHP GUI that enables the language to develop a desktop graphical user interface (GUI) based applications.

Data representation: PHP has the tool Image_Graph which helps the developer to create a different category of graphs, diagrams, scatter-dot plots and other means of graphical illustrations.

Desktop systems: PHP can use to create programs that can install on a personal computer. PHP-GTK is the library that enables this feature.

Image processing and Graphic designing: It has a GD library, Imagine and ImageMagick to facilitate this property. Rotation, cropping, resizing, building thumbnail icons, figuring watermarks and creating output images in varied forms including jpeg, gif, wbmp, xpm, and png is possible with PHP.

Pros and Cons of ASP.NET

The .NET platform is not a single entity but a set of different platforms. It is following a compiled programming construction with VB.NET C#/C# .NET F# development languages along with the development tools called Visual Studio and Mono. The major applications of ASP.NET include Intranet, Enterprise level CRM, Enterprise level websites and ERP apps.

Windows application: This form-based application is used in the day to day life, and it works only in Windows.

Console applications: It is a program that works in the background of the DOS window.

Here we go with the head to head comparison between PHP and ASP.NET to get a better insight. 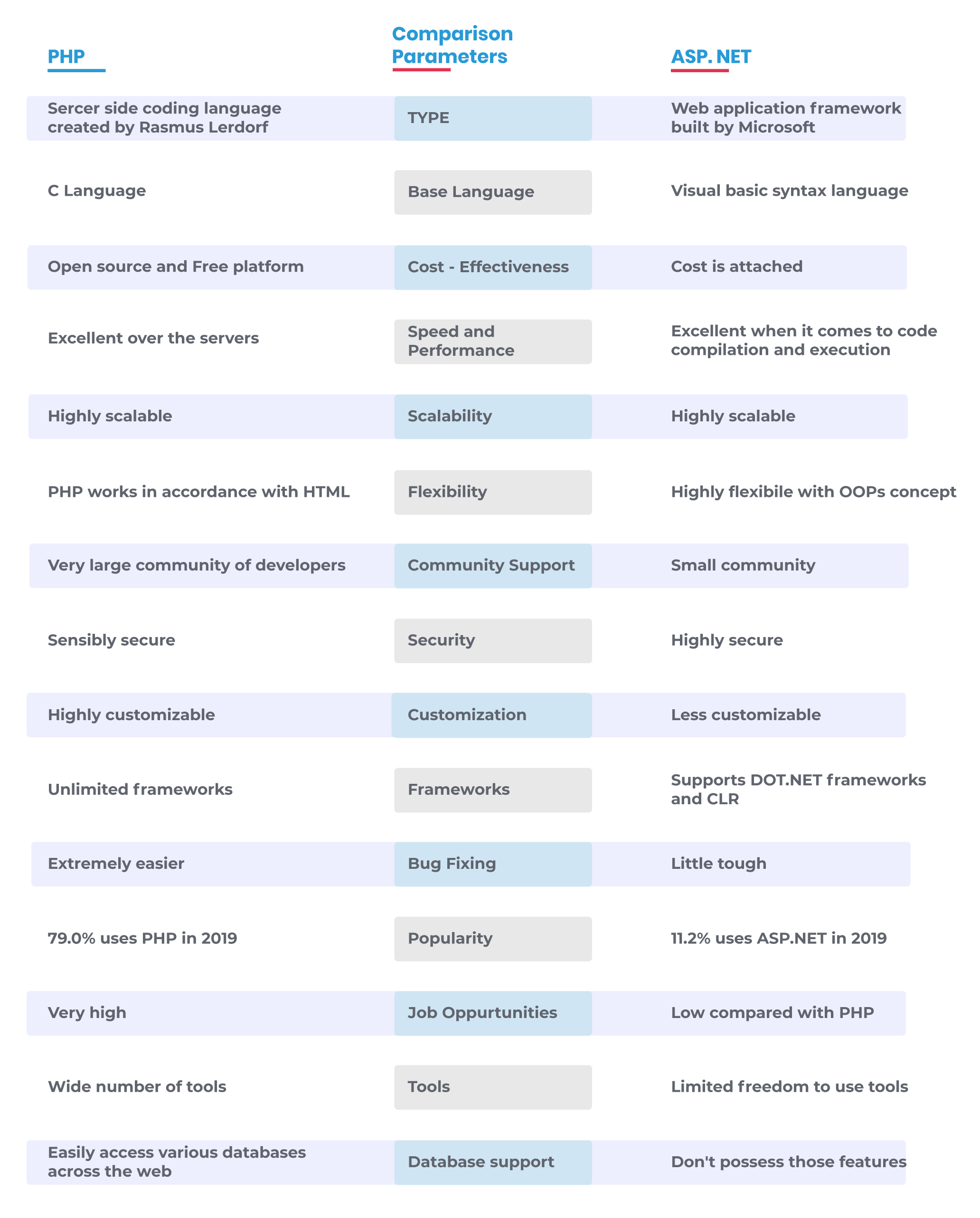 It is evident that PHP is scoring over ASP.NET with its unique features and functionalities. But it may vary with respect to the users and the project requirements. Still, if you have confusion about whether to choose PHP over ASP.NET  or should switch on to another platform, contact our team of Web Development Experts for a precise opinion.