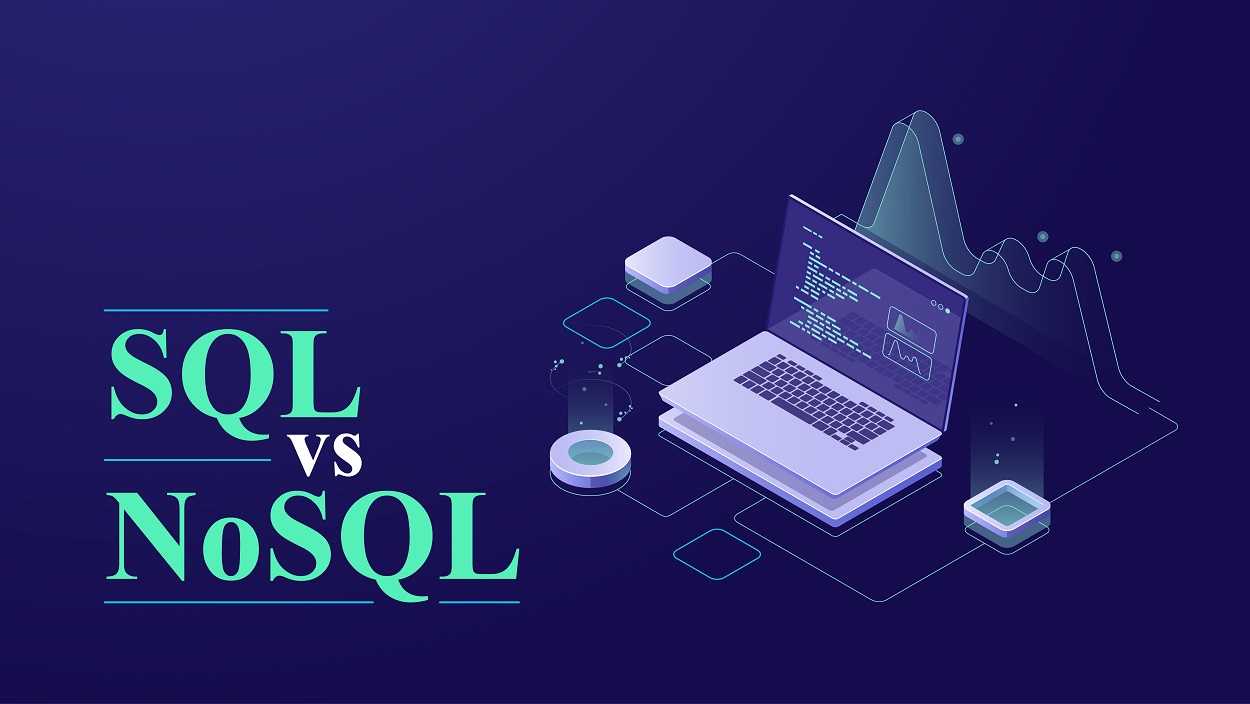 To create an application, developers need a database; there are several databases, and mostly they come under one of two categories: SQL, or NoSQL.

Each database type has its own value, its pros and its cons. So let’s try and understand everything about both of them before we try to match up SQL vs NoSQL databases.

What is SQL and NoSQL?

SQL vs NoSQL – the fundamental difference:

Structured Query Language (SQL) is the standard language that handles databases that stores information in a tabular form – relational databases. With SQL programming, you can add, modify, search, delete or edit records in the database; it can also optimize and perform maintenance of databases.

NoSQL doesn’t necessitate fixed schema, is easily scalable, and avoids joins, as it’s a non-relational database. It’s primarily used for distributed data stores where the need for data storage is immense – like real-time web apps, and bid data. Companies that collect humongous data daily, like Google or Facebook, would require this database type.

Conventional RDBMS utilizes structured query language syntax for data retrieval, to gain insights. A NoSQL database system however makes use of a whole suite of technologies capable of storing several types of data – structured or not, and even polymorphic data.

There are several differences between the two, based on the following categories:

Read more on Advantages and Disadvantages of RDBMS

However, it is also restrictive, as you need a predefined schema for describing your data structure right at the outset, and this structure has to be consistent throughout all your data. This means a lot of preparation in the early stage, and great difficulty in changing the structure later on.

NoSQL databases, on the other hand, have a dynamic schema for data that isn’t structured, and it’s stored in several ways: orientation can be of a column, graph, document, or KeyValue store.

SQL databases are scalable vertically – that is, you can increase the CPU capacity, SSD, or RAM, and increase the load on one server; this method is quite expensive.

Horizontal scaling is tricky with a relational database since there is often no clear way to split the data. Even if we split up the data, your SQL joins require a network request in addition to the CPU computation.

NoSQL can be horizontally scaled; you can add more servers, or perform sharding, to manage more traffic; this is more cost-effective than SQL. Think of it as adding more floors to a single building versus adding more buildings in the neighborhood.

SQL database vendors offer tremendous support for their customers; additionally, many independent professionals are also available to help and guide you. Whereas for NoSQL, there are very few independent experts willing to help you, and you have to completely rely on the community for support, especially to deploy large-scale projects.

SQL has been around for much longer, and is an aged technology; NoSQL is fairly new in comparison.

SQL can handle more complicated queries as compared to NoSQL, as the query syntax is fixed; this makes it ideal for high transaction-based apps. NoSQL queries are not as powerful.

Examples of SQL and NoSQL Database

Here are commercially available databases that belong to both categories:

The Role of SQL in a Database Management System

It is important to understand what role structured query language or SQL actually plays in a DBMS. They are:

A DB admin is able to define the arrangement and structure of data, along with the relationships between different stored data items.

A user program or app can fetch and use data stored on the computer’s database with the help of SQL.

Concurrent users can leverage SQL to share data so that users’ activities don’t clash with one another.

SQL enables the control and restriction of access for fetching and manipulating data, protecting sensitive data from being stolen.

In the event of a system failure or improper update, the SQL ensures that the integrity constraints are applied to protect the data from getting corrupted.

When to Use SQL and NoSQL Databases?

We have seen so far, what SQL and NoSQL is, and the difference between SQL and NoSQL; now we will discuss where exactly each type of database is or should be used.

When to use NoSQL Database

When to use SQL Database

When to Avoid NoSQL

Advantages and Disadvantages of SQL

Let’s move on to the specific benefits and drawbacks of both database types. First, we’ll look at the advantages of SQL:

SQL is extremely fast, and you can retrieve data from database records at record speed.

SQL follows both the internally approved standards – ANSI and ISI.

SQL doesn’t require coding, and hence the process is simple and without hassles.

An important feature of SQL is writing data integration scripts, and this is extremely helpful to developers and database administrators.

You can easily perform retrieval of data subsets within a database, with SQL. Select, insert, alter, delete, update, and add truncate are some of the most used elements.

Though it has many benefits, there are some disadvantages of SQL:

While there’s no need for complicated coding, the interfacing is not that simple.

Accessing it can be difficult due to the complex nature of the SQL structure.

Often, vendors have proprietary extensions to the standard SQL to make sure you can’t arbitrarily change vendors.

Programmers don’t have complete control over the database due to the hidden rules and conditions.

SQL operations can be very expensive.

Advantages and Disadvantages of NoSQL

It is time to examine NoSQL more closely. Let’s start with the advantages of NoSQL:

As they can store and combine different data types, they are very versatile as compared to SQL databases.

It is possible to update the schema on the go to suit changing requirements while avoiding downtimes or interruptions.

NoSQL databases are flexible enough to scale for a range of data growth types and at a lesser expense.

Being open-source, expensive licensing fees are not required for NoSQL databases; they can be run on basic hardware, which means, the deployment is inexpensive.

That’s a pretty impressive list of benefits, but we also need to see what the disadvantages of NoSQL are:

NoSQL databases do not have any standard definition of rules or roles, and the design and query languages differ greatly between various NoSQL databases, and this can cause confusion.

NoSQL databases do not have robust backup facilities or tools, and you seldom find these databases having a proper backup. This can be disastrous in the event of major breaches or software malfunction.

While NoSQL is highly scalable and performs well, it does not offer data consistency, rendering it slightly insecure when compared to SQL databases. Look at this example: when you enter repetitive data, it will just accept it without alerting you with an error message. However, in SQL databases, duplicate entries are simply rejected in the database.

ALSO READ: The Scope of Web Development and Its Future

SQL vs NoSQL – A Comparison

We have seen the SQL and NoSQL pros and cons; so how do the two match up against each other, and which one should the developer choose? For this, let us recap what we have already discussed.

After going through the advantages and disadvantages of SQL, this is what we can infer:

SQL databases make use of the ACD compliance to ensure database integrity. Thanks to the structured data, it does not require an integrated support system to use with whatever data type you want. Hence, for most businesses, especially financial transactions, this is the most preferred choice of database. However, there are some pretty severe limitations of SQL.

This is the reason that NoSQL is rapidly gaining popularity. It can accommodate various types of data and can scale rapidly with the addition of more servers concurrently. It supports rapid application development and is the best choice when performance speed is of the essence.

NoSQL is certainly simple to use; however, one must think about the implications of data stores when developing apps. You also need to think about consistency and the effects of sharding on data access and storage.

On the other hand, if your budget is tight, and you need high performance and scalability, NoSQL is your best bet. An outright SQL and NoSQL comparison may not give you the true picture, as both have their own purpose in application development. It is important to establish the goals of the application, and only then can you make a proper choice.

Webandcrafts is one of the leading website design company in India. Our services include website development, web design, mobile application development, digital marketing, etc. We are committed to providing the best services to our customers meeting industrial and business standards. If you have any queries on eCommerce development, contact us right away.